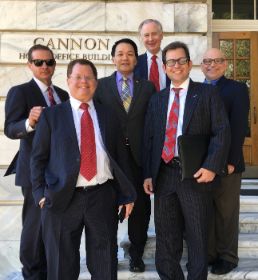 H.R. 1849 – “The Practice of Law Technical Clarification Act of 2017” will be part of the hearing entitled “Legislative Proposals for a More Efficient Federal Financial Regulatory Regime” being held by the Financial Institutions and Consumer Credit Sub-Committee of the House Financial Services Committee.

The witness list and other bills to be reviewed are as follows:

Ms. Anne Fortney, Partner Emerita, Hudson Cook, LLP will be testifying on H.R. 1849. Ms. Fortney is very familiar with our bill and issue. As she described in an e-mail to NARCA Executive Director Mark Dobosz, “I am very familiar with the issues involved in HR 1849. I happened to deliver the FTC’s testimony in 1986 in support of the bill that eliminated the attorney exemption. (I was the director of what was then called the FTC’s credit practices division.) Some debt collectors were abusing the exemption by hiring a licensed attorney in whose name the collection activities took place, even though the attorney had no oversight or involvement in the activities of the debt collectors. No one at the FTC or working in support of the legislation thought that a court would adopt the Supreme Court’s interpretation in Heinz of the removal of the exemption. The exemption in H.R. 1849 is appropriately narrow. I am glad to be speaking on the bill in my testimony nest week.”

The hearing will be televised. You can view the telecast live at www.financialservices.house.gov/. Mark Dobosz, Executive Director, will also be posting commentary on Twitter live from the hearing.

The National Creditors Bar Association recently submitted official support for H.R. 2706: Financial Institution Customer Protection Act of 2017 being sponsored by Representative Blaine Luetkemeyer (R-MO) in the U.S. House of Representatives. H.R. 2706 is a bill placing limits on "Operation Choke Point," an initiative that uses broad enforcement tactics that could create unnecessary risks to consumers and the economy. Over the past few years, since "Operation Choke Point" began, a number of members in the National Creditors Bar Association were unilaterally impacted by their banks. The National Creditors Bar Association thanks Representative Blaine Luetkemeyer for his continued support and leadership in addressing the egregious actions related to "Operation Choke Point."

Creditors Rights attorneys are experienced professionals. They work as partners with creditor clients to attain and enforce legal judgments and, just as important, help consumers maintain the privileges associated with positive credit.

Find the products and services you need to perform your work and run your law firm more efficiently and effectively. Are you a service provider? Get your business listed in the guide for free, or get an enhanced listing and more exposure.

Stay up-to-date on the latest sector news with Creditors Collections Today. You can sign up to receive personalized headlines delivered daily to your inbox or browse the news aggregrator website for the latest news and what's trending.